Mercury as a messenger with the wings of spirit,

he’s pure brilliance in every way.

His energy spreading and radiating far out,

such a communicator one would say.

Imparting his knowledge in every great way,

Finding a better orator, there never was one,

a match would be hard to find

To balance and juggle the possibilities as well,

in bringing those ideas into light.

Extremely creative in reaching his goals,

but he can make it appear right.

In duality he’s about truth and falsehood,

by not caring for anybody else.

The twinkle he has and the curl of his lip,

The monkey that comes along by his side,

it’s great Thoth as the golden one.

Along with telepathy he’s inspired vision,

he has a true knowledge of being.

An ability to bring about transformations,

a directness to help others in seeing.

an arrow gets him right to the point.

With those two snakes at the head and tail,

in healing he won’t disappoint.

A gold cup with snake to hold onto emotions,

The Eye of Horus, great God of perception,

sees truth in the tales that he tells.

So will he just misuse those great powers of his,

to get himself to the top of his game.

Or could he be much more self-examining,

work in service to those that have pain.

I’m studying the Thoth Tarot again so I thought I would attempt to put individual cards into poetry to assist my memory.  Not sure if it will work but it’s fun to play with 🙂 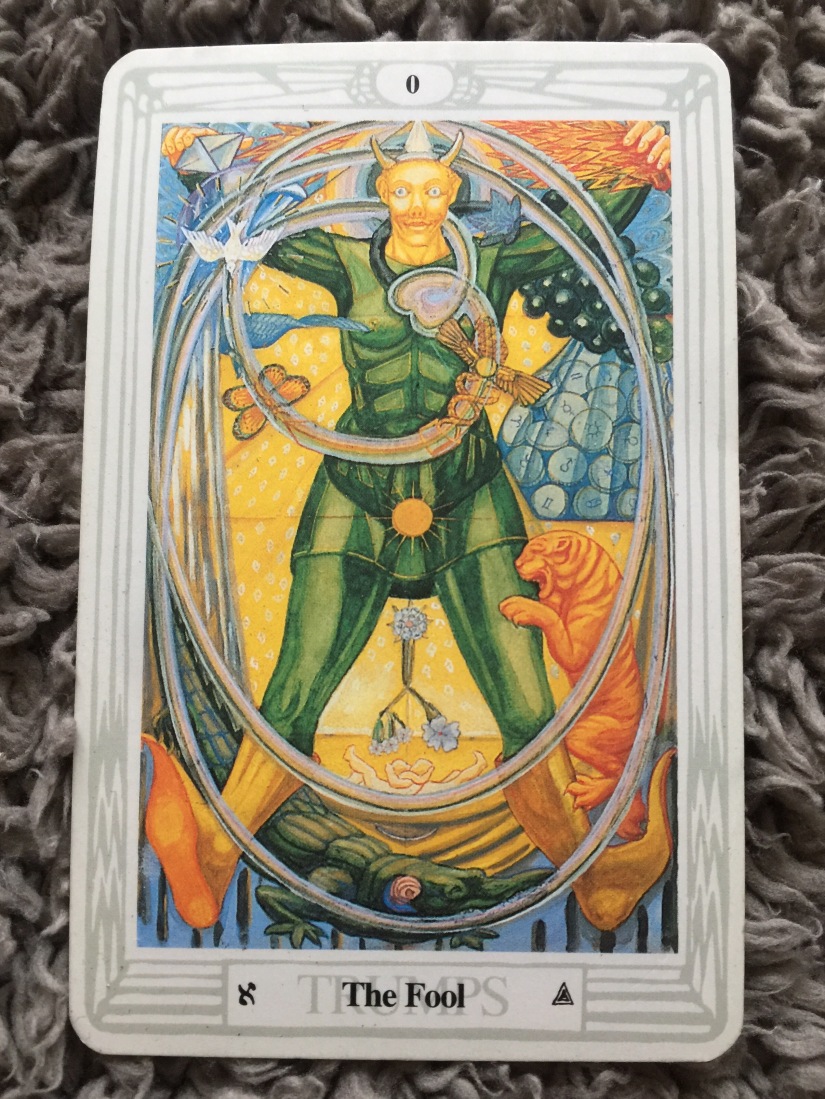 giving birth to something new.

To take that giant leap of faith,

even if nobody believes in you.

An umbilical cord of new birth,

wrapped around you four times.

there’s nothing here that binds.

The butterfly of transformation,

flowers split into bunches of three.

Overcoming the fear of the tiger,

you know where you need to be.

A crocodile with such solid jaws,

you can cut through anything.

Then the harvest into fruition,

it has been a while since Spring.

The grapes that signify fertility,

yes you will so fit into this role.

I know you’re ready to take a risk,

you’ve the courage to stand alone.

Listening now to your inner voice,

in touch with yourself on your own.

With the dove for the love of others,

the children that show us a pair.

Your unshakable faith in existence,

walking on now without a care. 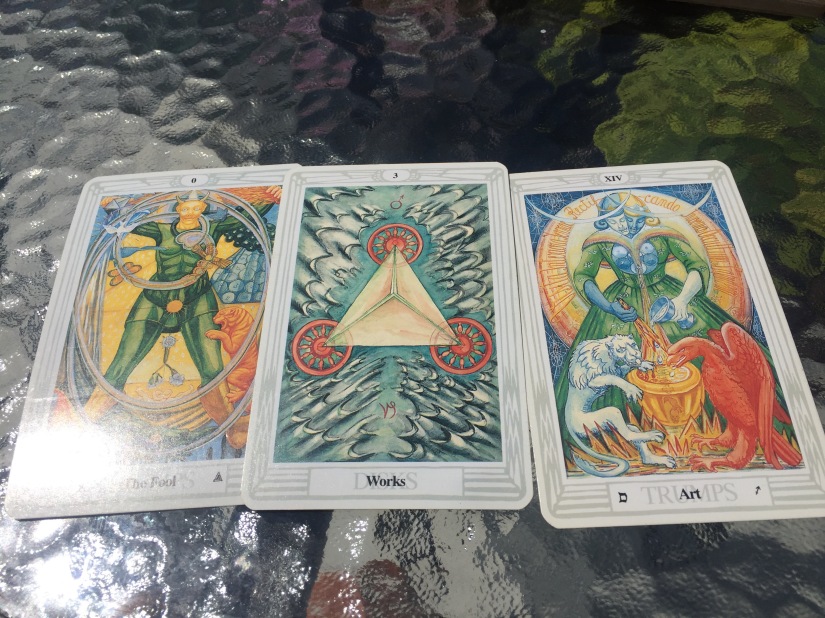 These are the three cards I pulled today, I was pretty pleased with them.

The fool, I relate to him but he speaks of transformations and creativity. It’s about being ready to take a risk and the courage to stand my ground. Trust my inner voice and take a leap of faith.

Three of Disks, Employment of energies, body, mind and spirit. Clarity, the heavens are beginning to open and the clouds of uncertainty are clearing.

So there’s a rough outline of the cards. I’m sitting on the beach thinking about them and wondered if anyone fancied giving me a reading from them.

The shackles of time adorn his feet and yet he is young.  He waits patiently for he knows that the gods will not hurry, he is but one in a universe of waiting.  His seat is old and yet warm with the memories of those that have gone before, it will remain in these realms and serve as the throne of another.  Although young in this life he has travelled here before, learning each time but will come again.  The impatient youth of another lifetime went on before him, this time he is patient, knowing, at peace with himself.  He has had company on his travels and left his mark in the places he has visited.  His ghost remains on the earth and the people whose path he has crossed have an indent of his being on their soul.   He is a thoughtful man, when he speaks it is with clarity, boldly speaking his truth.  The eagle, adorned with golden feathers is ready to fly having lived many lifetimes with the man, the bird will wait for his return but for now it prepares its feathers for the next flight.  There are no possessions on this plateau except the memories and lessons of this life reflected in an orb of light in his right hand.  The young man looks into this as he waits, reflecting, thinking and listening to the universe.

Something I wrote some years back, I’m not sure what I was thinking at the time of writing but found it interesting when I read it back again today.

I pulled the tower in 2013, not for the first time in my life but anyone who understands the tower in the tarot deck, will know it is significant.  I’m not frightened of the tower because it signifies necessary change, it’s just not always easy.  In fact I have pulled the tower at some major points in my life.   I pulled it when my husband and I lost our business, home and marriage.  I pulled it just before I quit a very well paid secure job at the beginning of 2013 and I pulled it before my mother died eighteen months later.

The tower is a test card, it usually indicates the breaking down of establishment, established ways of living, signifies necessary change and rocks the status quo.  I’m not one for thinking too much about it, what will be will be.  My friend on the other hand is terrified of the card, she makes me laugh because as much as these cards do tend to come up at the right time, they are really only for entertainment.  It could be that our unconscious self, that, that knows where we are going knows exactly where each card is in a pack.  I am quite psychic, do read the cards etc but don’t let it rule my life, as we are very much in charge of our own destiny.  Small changes we make one day might take us up a totally different path the next, although I do think the lessons along the way are the same, as is the destination.

Well the point of this post is to look at the changes that have come about for me over the last few years.  I started this blog as my mother was dying, it helped me process her impending death, she died in 2014 and I left it alone.  A few months back I came back to my blog and it is like I am a different person.  I talk out loud through my writing and I am now nearer to making sense of who I am.  It has been a difficult three years, extremely difficult.  The day my mother died, my stepfather had a heart attack and cancer was discovered.  I brought him home to live with me and he died at Christmas, two months after my mum.  I got through it with the help of my family and friends and now, two years later feel I have finally reached the other side.

I am happy, although I would do anything to have my mum back with me I have also had to stand on my own two feet.  She was my rock, she listened to me, supported me and worried about me.  There is something about the death of a parent that makes you grow up.  You have to think for yourself and make your own decisions.  It’s not that you didn’t anyway, but you did so in the knowledge that your parents were supporting you and loving you all the way.  I’m single so don’t have a partner for support but this time has been so good for me, I have discovered myself.  I’m comfortable with who I am and don’t rely on anyone for confirmation I’m going the right way.

Where am I going now, I work as a consultant in care, although it doesn’t really fulfil me anymore.  I’m between contracts and not really looking for anything along those lines, I think I’ve done my time.  I’m looking for a new direction, that’s why I have so much time to write and read your blogs.  I know I want to work in a way that will help others, I have natural empathy and can help people work things out somehow, maybe it’s because I listen and I’m good at untangling knots.  I’m a great believer in what is meant to be will not pass you by, so I’m waiting patiently.

I got a new tower today, I found it in my stats which made me think of the significance of the tower in my life.  Just maybe I will win the euro millions tonight and spend the rest of my days happy and blogging 🙂